On Tuesday I decided to go hunting.  Not hunting to kill, hunting with a camera.  SInce I've done all of the hard ground trails at Usery, this time around I explored some of the less traveled washes.  If you're looking for wild life, washes seem to be the place to go.  For this trip, I stayed on the Amigo Wash trail. 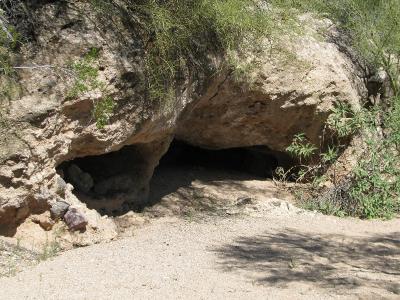 Just a couple hundred feet up the wash, off of the Blevins trail, I found some small caves.  Nothing big, but large enough to crawl into if you don't mind sharing space with whatever else calls them home.  One might think that they would be a good place to escape the rain, but seeing how they're down in a wash, that's not so much a smart idea.  You'll only remain dry up until the time the torrent of runoff water washes you away.  That's why they're called washes.

The first critter I ran into was a bit of an oddity.  It was a squirrel, but it was very dark, almost too dark.  I couldn't find any references to brown/black squirrels on google so I don't know what kind it was.  I'll have to ask a ranger next time I see one.  I followed it from far behind for a while but just as I was going for my camera, it ran off. 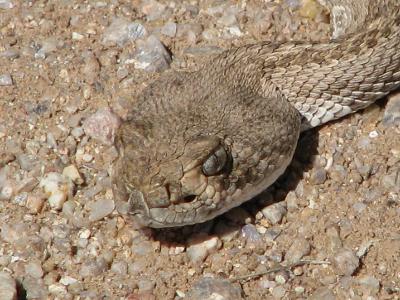 My next encounter was with a 4' western diamondback rattlesnake.  For a while I thought it might have been dead because it didn't move at all for almost the entire time I was watching it.  Even as a guy on a mountain bike came along, the snake never flinched once.  The funny thing about the biker, (funny in hindsight) is that I yelled to him to let him know there was a snake ahead but he couldn't hear me because he had headphones on.  He finally stopped, took off his helmet, pulled out his earphones and said "Uh what?" and I pointed to the snake which was about 6 inches from his leg.  He moved pretty quick.  The snake, however, did nothing at all.  After about 15 minutes of me walking all around it and taking photos, it got tired of me and crawled back into the bush. 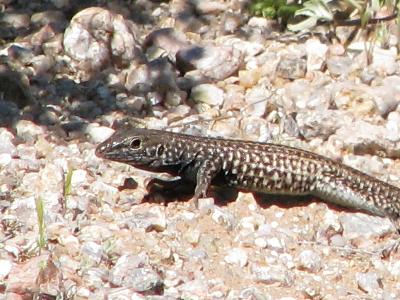 I also finally got a photo of a Great Basin Whiptail.  It's really sad that I have no idea of the names of most of our other desert flora and fauna so I'm going to take the next ranger class and learn them.  Anyway, the things are so damn fast that it's hard to get a photo unless your camera is already out and ready.

Spring has just about sprung here and the desert is starting to get a lot of nice color to it.  First the subtle reds appeared, then the yellows, and most recently the oranges.  Soon enough the purples will make their appearance and the beauty will be complete. 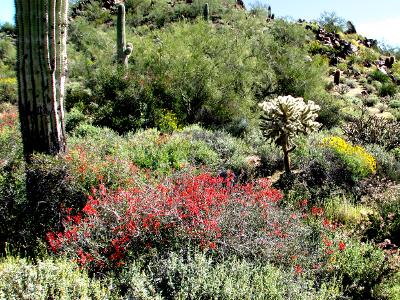 Aside from hiking, my other current project is rebuilding my MythTV DVR.  I first built in when I moved to Tempe, but just after I got cable installed, I found out that Tempe was all digital which then required me to rent their DVR box as well as subscribe to additional plans I really don't want.  It seems that they have gone to analog for channels below 100 so MythTV will do me fine and will save me about $500 a year in cable fees.