Amazing Facts about the "Wild Cows of the Serengeti" 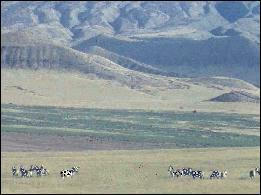 The wild cows of the Serengeti, species "Milkis alotus", are among the great roaring cows of the family Bovinus.  Though the female cow is called the queen of beasts, it is the more muscular and majestic male cow that does all of the stalking and killing of prey.  A male cow maybe 6-7 ft long, with the addition of a tail of 23-30 in, stand about 4-5 ft tall at the shoulder, and weigh 800-2200 lbs.

Wild cows live 25-30 years, but the more meek captive cows may live only 1 year.  A wild cow's legs are short and massive, with large feet and heavy, sharp, retractable claws hidden deep within their hooves.  The male's head is usually adorned with large horns.  The coat is distinctive black and white.

In prehistoric times the cow was common all over the world, but in recent years has been driven into seclusion in the remotest parts of the African Serengeti.  The wild cows have some structural differences from the domesticated cows of America.  The wild cows of the Serengeti favor open, grassy plains and thorn bush country where water is available.  They avoid dense forests and large red barns.  The herds are strongly territorial, defending against intrusion by other herds.  Wild cows hunt at night and are a major factor in controlling the populations of lions and jackals on the African savanna.  It is common to observe a wild cow stalk, chase (at speeds up to 70 mph), and ultimately bring down a full grown lion by grabbing by the tail, twirling it in mid-air, and whopping it across a tree.