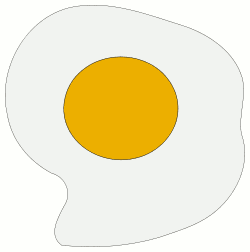 I've been doing a lot of cooking lately and unless everyone is lying to me, I'm getting good.  I've been cooking a long time for myself, simple stuff mostly, but the stuff I'm doing lately has received the "holy shit that was good" seal of approval from all those who I've been cooking for and some of them are damned good cooks themselves.  I guess that's good.

A month or so ago Amber and I decided that every Wednesday is "Daniel Cooks Day" and I'm rather enjoying it.  I go over to her place in the morning and make everyone breakfast and then dinner that same evening.  Every week it's something new.

During the past few months I have been told I have mastered the art of breakfast omelets.  I've only made them for everyone once but I make them for Amber pretty often.  I usually put in red and green bell peppers, onions, mushrooms, diced ham or turkey, garlic, sharp cheddar cheese and a dash of crushed chili peppers for a little bite.

Last Wednesday I did breakfast burritos for all.  It was pretty much the same as making an omelet except you mix the all the same ingredients first and then give it a few scrapes before it sets.  I put in a little salsa too.

Tonight I experimented with sunny-side up eggs.  This may be old hat for most people but I was raised my entire life without ever eating a cooked whole egg.  Mom thought I was allergic to them, which in retrospect is weird because I ate all kinds of food made with egg in it, but the whole childhood experience of one kid, one egg, one mouth and a fork never happened.

In experimenting I went though the the few remaining eggs in a just expired carton and by visual reference, they look picture perfect.  I think Amber will be having sunny-side up eggs for breakfast tomorrow so I can see if they taste as good as they looked.

When I finish the update to SaidSimple, I'll start posting the menus  and some recipes.  As a teaser, I have come up with a Teriyake sauce  that is a clone of Yoshi's dynamite chicken sauce.  I'm  still perfecting it but it's close, and even if it weren't close, it is  still awesome.