While browsing the web today, I came across this article about a nudist bicyclist in the UK.  At the very bottom of the article is a citation from British Law.

Section 66 of the Sexual Offences Act 2003 states a person only commits the offence of exposure if "he intentionally exposes his genitals, and he intends that someone will see them and be caused alarm or distress".

America has its own versions of the same.

What in the hell is wrong with people today?  How can someone can be caused alarm or distress by seeing bare breasts, a penis or a vagina?  Give me a flippin break!  Everyone has them!  Everyone!  Are you idiots listening?  Looking?  Look down!  You have one or more of them too!  They're there!  Go look!  See?  You know what yours looks like!  I know what yours looks like!  Who on this planet has not seen them?

If you're one of the brain dead idiots who thinks they need to be hidden because they are used for sex, then we had better pass laws about exposing our tongues and fingers too because they're as useful for sex as they are for licking peanut butter or opening soda bottles.

Attention stupid people:  The primary sex organ is the human brain.  Are hats going to be manditory soon? 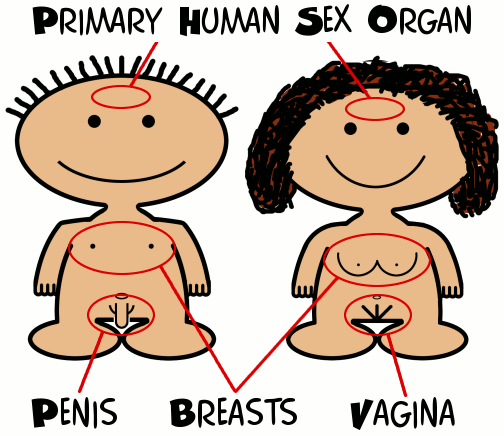 Do I sound angry today?  Yeah, I am.  We have a society that for the most part craves the worst of what humanity has to offer but at the same time will scream and need therapy if they see something that God planted on every living person and animal.  It flat out pisses me off and I am tired of seeing society become sicker by the day because of people's silly notions about the human body.  If people don't like it, they can go get their own damn planet and wear muclucs on their fat heads for all I care.

Right after I wrote this, I heard an alert on the afternoon news broadcast.  A man is being sought after exposing his penis to a young girl on her way from school.

First, for the record, if they find the man they should put a bullet through his head on the spot because he did it to sexually gratify himself while dominating a child.  But, if as a society we were  permissive of non-sexual nudity, this would not have traumatized the girl, she probably would have said "uh yeah, whatever homeboy."  In all likelyhood, this event never would have occured.